To share your memory on the wall of Alan Ferazzi, sign in using one of the following options:

Receive notifications about information and event scheduling for Alan

You will receive any future notification messages.
Print

We encourage you to share your most beloved memories of Alan here, so that the family and other loved ones can always see it. You can upload cherished photographs, or share your favorite stories, and can even comment on those shared by others.

My heart broke to see you today. How I wanted to just give you a hug, my old friend. I’m sending you and your family much love.

Posted Jun 10, 2020 at 07:53pm
Please accept my condolences on learning of the passing of Alan. He was a valued public servant.
Richard M. Serkey
Comment Share
Share via:

Posted Jun 10, 2020 at 09:56am
Alan was a great man with a truly kind heart. He was so very good to our family, particularly in the way he looked out for my mother after the passing of my father. Condolences, prayers and love to Renee and family. Godspeed, Alan.
Comment Share
Share via:
SE

Posted Jun 08, 2020 at 05:10pm
Renee and family, sending our condolences to you in the sudden loss of Alan. His ever smiling face will be missed at PCC as he was always kind to me in the time I have been a member. Bless him and your family.
Comment Share
Share via: 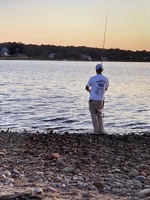