To share your memory on the wall of Daniel Clifford, sign in using one of the following options:

Dan was the proudest grandfather and his smile would illuminate a room whi... Read More
Clifford, Daniel, John, Jr., passed away on August 22, 2019. He was born December 10, 1956 in Quincy MA, the son of the late Beverly (Reed) and Daniel Clifford.

Dan was the proudest grandfather and his smile would illuminate a room while talking about his kids. The man had the best stories, a walking history book. He loved his Boston sports teams and always had time for Nascar. Dan grew up in Weymouth where most of his legendary stories came from and has been a resident of Plymouth for the last 33 years. He was always willing to help his neighbors and has shown many young men how to turn a wrench.
Dan is survived by wife Emily Edwards Clifford. He also leaves behind his daughter Stacey Hensen (Weymouth), sons Daniel John Clifford 3rd (deceased). David Joseph Clifford and wife Hollien Clifford (Plymouth). Richard James Clifford and wife Kristen Clifford (Wareham). Dan had 13 grandchildren and many nephews and nieces. Siblings include Donna and Nicky Hubbard, Deborah Creighton and Shawn Creighton. James Clifford (deceased) Tracy Clifford (deceased).

We would like to think he got an offer from the gods in the sky he couldn’t pass up. A permanent vacation, a family reunion where he listens to his music as loud as he wants, reads until he falls asleep. He gets to drive along the boulevard in his Cadillac with a cigar in his mouth enjoying the sunset with his son as his passenger. Dan will be greatly missed by all who knew him.

We encourage you to share your most beloved memories of Daniel here, so that the family and other loved ones can always see it. You can upload cherished photographs, or share your favorite stories, and can even comment on those shared by others.

Posted Sep 15, 2019 at 02:28pm
Sincerest condolences. When the stories started they lasted sometimes for 30 minutes. He will be missed. RIP to a great guy! Who may now use the wings he was given, to fly with the angels amongst us.
Comment Share
Share via:
C

Posted Aug 28, 2019 at 02:09pm
I am so sorry for your loss. Dan was such a nice guy. The love and pride he had for his family beamed. I will miss the weekly stories he would tell me when I picked up Ev, he definitely had the best things to tell ❤️My heart is broken for all of you. May Dan Rest In Peace.
Comment Share
Share via:
NM 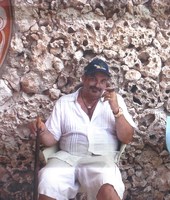