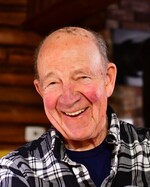 Daniel E. James, beloved husband, father, and grandfather, passed away this past Tuesday, with his
family, whom he cherished, at his side. Dan was a good, good man. He was a gentleman. His demeanor
was sincere and understated, and his outlook was optimistic, always finding the good in others. He was
a beloved leader and role model to his family. His gentle nature and optimism earned him lifelong
friends.

Dan was born in Johnstown, Pennsylvania on January 12, 1936, the son of Sarah Engelhardt James and
Everett R. James. He attended Southmont High School and Penn State University. Trained as a Civil
Engineer, he worked for Tully & DiNapoli in New York City in the early 1960’s, building elevated
highways around the New York Mets Baseball Stadium. It was in New York that Dan met Dianne Horgan,
his beloved wife of nearly 58 years. They were married on February 23, 1963 and soon after left New
York for Dianne’s home town of Centerville on Cape Cod.

On the Cape, Dan was initially employed as a carpenter, involved in the planning and construction of
several houses, one of them to be his family’s home. He volunteered at the Federated Church of
Hyannis as construction planner and supervisor for the new wing of the Fellowship Hall. Dan
subsequently was a member of the Finance Committee in the Town of Barnstable, and eventually joined
his father-in-law in the insurance business in Hyannis. Dan earned a Master’s Degree in Financial
Services and many designations in the field of insurance and finance, CPCU, CIC, CFP, CLU.
Second only to the love for his family and friends, was his passion for the game of softball. Over the past
thirty years, he enjoyed the camaraderie he had with his teammates and friends in the Cape Cod Senior
Softball league and in the Winter league in Florida. Among his many recognitions and awards in softball
was the: “Spirit of Senior Softball - for inspirational leadership on and off the playing field.” Dan was an
all-star player, travelling twice with the Cape team to Utah to the Huntsman Games. Dan could play any
position on the field, but particularly enjoyed pitcher and short stop. He served as Manager on many
teams over the years, and was an umpire for 25 years for the Senior League, as well as umpiring High
School girls’ softball games. Dan was proud of his work with teammates in building the Memorial Field
in Harwich, which was built entirely by volunteers. A broken wooden mast from a schooner was
repaired and repurposed by Dan into a Flagpole dedicated to past teammates.

Dan is survived by his loving wife Dianne, their two children, Debi and Dan, his daughter in law Kathy,
and his granddaughter Sarah and grandson Ronan. Dan’s survivors also include his sister, Susanne
Schmucker of Pennsylvania, and brothers, Fritz James of Nevada, William James of Washington, and
David James of California.

A celebration of Dan’s life will be planned in the springtime when it is safe to gather friends. There will
be no calling hours due to pandemic, and burial will be private. A memorial contribution in Dan’s
memory could be made to the Parkinson’s Foundation. Dan’s family would appreciate personal
remembrances written on the memorial website at: Bartlett1620.com.

Obituary lovingly written by the family of Daniel James