To share your memory on the wall of David Booth, sign in using one of the following options:

Provide comfort for the family of David Booth with a meaningful gesture of sympathy.

Posted Apr 10, 2019 at 06:01pm
David has been a part of my life as long as I can remember. He always had a smile and a soft voice, even if he was correcting errant children. His joy for life was blatantly worn on his face, even when he was tired. He was my hero one year. letting me use his washer and dryer to clean over 30 tie-dyed t-shirts for Reunion without any concern if his own laundry would be multi-colored the next time it was washed. His depth of memory for the "care and feeding" of the Campgrounds and his love for our Onset Community will be missed for a long time. Rest well, my friend.
Comment Share
Share via:

Posted Apr 09, 2019 at 03:22pm
At ease, faithful warrior. It is time to rest in the arms of the Lord. You served your country with honor. You raised two amazing sons who truly reflect your values, love and faith.🇺🇸
Comment Share
Share via: 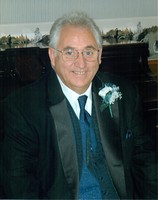