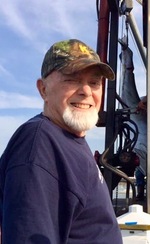 Edward John Smith, 79, of Plymouth, formerly of Randolph, passed away on July 21, 2019 with his family by his side. He was born in Dorchster, MA, the son of the late Anna (McDoughagh) and John Smith.
Ed served 4 years in the United States Air Force and 26 years on the Randolph Fire Department before becoming a caretaker at a Family estate on Cape Cod. He enjoyed many activities, including; hunting, fishing playing poker and cards. Ed’s greatest joy came from watching E.J. in all his sports, hence his “Great pride and joy!”
Ed leaves behind his beloved wife of 54 years, Jean (McNeil) Smith. He also leaves behind his loving son and his wife, E.J. and Loretta (Occhipinti) Smith. He is survived by his brother, James W. Smith and his wife, Debbie of Virginia Beach, Va and his sister, Ann Marie Rogers of Sandwich as well as his sister in law, Pat McNeil. He also leaves behind many nieces and nephews. He was preceded in death by his brother Frank Smith and his best friend and brother in law, Don McNeil.
Funeral arrangements will be under the care of the Bartlett Funeral Home, 338 Court Street, Plymouth. Calling hours will be held on Monday, July 29th from 4-7 pm. Interment will be at Massachusetts National Cemetery on Tuesday, July 30th at 11:00 am.