To share your memory on the wall of Gerald Conlon, sign in using one of the following options:

Provide comfort for the family of Gerald Conlon with a meaningful gesture of sympathy.

Print
On Saturday, April 18th, 2020, Gerald “Jerry” Patrick Conlon, loving husband, father and grandfather, passed away at the age of 77.

Jerry was born in 1942 in the seaside town of Bray, Ireland to Patrick and Winifred Conlon. He immigr... Read More
On Saturday, April 18th, 2020, Gerald “Jerry” Patrick Conlon, loving husband, father and grandfather, passed away at the age of 77.

Jerry was born in 1942 in the seaside town of Bray, Ireland to Patrick and Winifred Conlon. He immigrated to the US with his family when he was in his teens. Jerry graduated from Wentworth Institute of Technology and attended Arizona State College. On May 30, 1971, he married his wife of 49 years, Ellen Marie O’Toole. They became longtime residents of Plymouth, MA where they raised two daughters, Michelle and Kimberly.

Jerry had a love for the outdoors and animals. Growing up in a coastal town, the ocean was in his blood. He was happiest when on his boat, often with his Co-Captain Luci the dog, and an ice cold beer. Jerry was a kind, humble man. He took great pride in his home and his yard. He loved to take on home improvement projects, which his girls took full advantage of when they moved into their own homes! It is that generous and caring spirit that defined Jerry. He was the strong, silent type....a man of few words with a huge heart. When he smiled....no words were needed....you could see the pride and love beaming from within.

Jerry is survived by his wife Ellen, his daughter Michelle and her partner Greg, his daughter Kim and son-in-law Ben, and his three grandchildren, Nadia, Charlie and Tyler, who will fondly remember him as Gramps.

Given the current environment, a celebration of life will be planned in the future. Donations may be made in Jerry’s memory to the MSPCA.org or Old Colony Hospice, Director of Philanthropy, 321 Manly St, West Bridgewater, MA 02379
Read Less

Receive notifications about information and event scheduling for Gerald

We encourage you to share your most beloved memories of Gerald here, so that the family and other loved ones can always see it. You can upload cherished photographs, or share your favorite stories, and can even comment on those shared by others.

Posted Apr 23, 2020 at 10:02pm
So very sorry to hear of Gerry’s passing. May he Rest In Peace. Our thoughts and prayers are with you..
Comment Share
Share via: 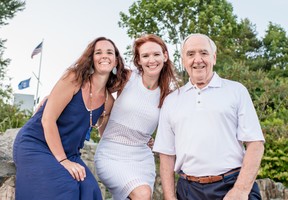