To share your memory on the wall of James Knieriem, sign in using one of the following options:

Print
James B. Knieriem
“Farmer Jim”
March 22, 1959 - July 23, 2020
James B. Knieriem of Har... Read More
James B. Knieriem
“Farmer Jim”
March 22, 1959 - July 23, 2020
James B. Knieriem of Harwich, MA passed away peacefully on July 23rd 2020 at the age of 61 after his battle
with cancer. He was born and raised in Mokena Illinois and attended Lincoln Way Central High School. He made his way to Gulfport Florida where he was an auctioneer. He also had a love for antiques and farming. In 1995 he moved to Cape Cod, MA with his family where he would pursue his dream of farming. James was well known in the agriculture business on Cape Cod and surrounding areas and had served as a previous president of the Cape & Islands Farm Bureau. He was also actively involved as the Livestock Director at the Barnstable County Fair for many years and enjoyed working with his daughters, in 4H, raising and showing their own livestock animals and farm grown vegetables. James is survived by his partner Debbie Williams, of Harwich MA, and his children from previous marriages; his son David Roesener of Denver, CO, his two daughters Jacklyn Watkins of Santa Fe, TX and Rebekah Knieriem of Harwich MA. He also has two grandchildren Colton and Zoey Watkins and Son in law Chris Watkins also of Santa Fe, TX, his sister Janice Fischer of Libertyville Illinois, his brother Rodney Knieriem, of Illinois and his nieces and nephews Jenny Parmley, Eric Fischer, Laura Piazza and Eric Knieriem also of Illinois. He is predeceased by his parents, Raymond and Jeanette Knieriem both of Mokena, Ill and his daughter Paige R. Knieriem of Dennis, MA. Per his wishes, James will be cremated. No services are scheduled at this time.
As an expression of sympathy, memorial donations may be sent to: Animal Rescue League of Boston, Brewster Office, 3981 Main Street, Brewster, MA 02631.
Read Less

Receive notifications about information and event scheduling for James

We encourage you to share your most beloved memories of James here, so that the family and other loved ones can always see it. You can upload cherished photographs, or share your favorite stories, and can even comment on those shared by others.

Plant a Tree in Memory of James
Plant a tree 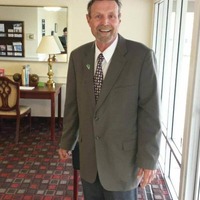