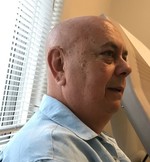 James Paul Uvanitte, Jr., of Wareham, age 70 passed away on August 26, 2020 after a long
and courageous battle with illnesses at home. Jimmy is survived by his wife, Jennifer. He was
the son of his late parents, James Sr., and Vivian Uvanitte. Jimmy is also survived by his
children from his first marriage, Michael, Michelle, and Daniel, and his grandson, Samuel James
Uvanitte of Carver. Jimmy is also survived by a brother, Donald (Donna) Uvanitte of Quincy, his
sister Diane (George) Kirk of Plymouth, and a brother Richard Uvanitte of Stoughton. He was
predeceased by his brother Bill (Carol) O’Day of Plymouth, and his sister Yvonne of Quincy. He
is survived by many cousins, nieces, nephews, grand-nieces, and grand-nephews. He was also
survived by three brothers-in-law, a sister-in-law, and other relatives and friends in Jamaica. He
will be missed by all his former co-workers, especially his good friends, William McCombe and
Paul Rocha.

Jimmy graduated in 1969 from Quincy High Vocational Technical School. He worked at
Woodward Spring as a heavy-duty mechanic, and then for many years at N Star in Wareham
until retiring a few years ago. He took great pride in his work and could often be found working
on vehicles for friends and family. Jimmy was a caring and dependable friend and brother. As a
teenager, he enjoyed water sports, particularly boat racing where he could often be found racing
his hydroplane or water skiing on the Town River. He enjoyed long motorcycle rides and
adventures with his brother, Bill. Jimmy also enjoyed holiday dinners and celebrations where he
liked to help with the cooking and preparation. He was the “official gravy stirrer.”
Jimmy will be missed by all. Private arrangements were provided by Bartlett Funeral Home in
Plymouth.

Obituary lovingly written by the family of James Uvanitte