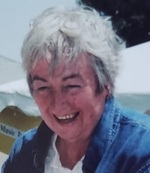 Falmouth, MA
Joanne M. (Duffy) Silva passed away on Monday, August 12th surrounded by her husband and partner in life, Thomas Silva; Tommy as she called him, and her children. Duff, as Tom called her, is survived by her son Patrick Silva and his wife Danielle of Lancaster, MA, her daughter Jeanne (Silva) Pellegrino and partner David Bazin of Shrewsbury, MA and two beloved grandchildren, Logan Pellegrino and Cameron Pellegrino. Joanne was not one for formality and referred to herself as Jo-Jo or Grandma Jo.

Joanne was born on April, 19, 1946 in Worcester. The daughter of James and Ann (Breen) Duffy. She lived in Worcester, MA for most of her life before moving with Tom to Falmouth, MA. Tom and Joanne were married for 51 years.

She leaves behind two sisters Mara Lavigne of Holden, MA and Ann Ruder of Naples, FL, a brother Joseph Duffy of Ohio, two sister in laws Susanna Duffy of Litchfield, NH and Deborah Wernholm-Duffy of Holden, MA, several nieces and nephews. Two brothers have pre-deceased her for whom she missed terribly, James Duffy and Michael Duffy.

Joanne will be remembered for her generous spirit to neighbors and friends, especially her laugh. A laugh that could be heard rooms away. A very social person, Joanne was proud of her Irish heritage and enjoyed entertaining. She freely opened her home to others. She enjoyed listening to music and could be found dancing with Tom in the living room. She has left us with fond memories of spur of the moment parties, card games and late night chats. Joanne has touched many lives and will be missed by many.