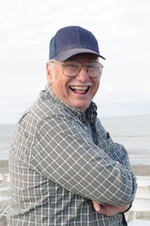 Norman was born in Manchester, NH but was raised in Camden Maine and graduated from Camden High School in 1955. He entered into the United States Air Force in 1957 and served as a radar technician. Norman met his beloved wife in Germany while stationed there with the USAF. He was honorably discharged in 1961.

Norman was a man of the sea who enjoyed fishing on his boat, the Kestrel. He was a marine electronics technician who spent many days in Duxbury Harbor working on the Kestrel and enjoying the company of many friends there.

He will be remembered as an avid story-teller with quick wit, often teasing his family members with a smirk on his face. Norman was a collector of family history and loved to share stories and old memories often through a compilation of beautifully kept slide photographs.

Funeral Arrangements are under the care of Bartlett Funeral Home in Plymouth, Visitation will take place Saturday, June 29, 2019 from 4 – 7 PM with a burial taking place on Monday, July 1, 2019 at 10am at the Massachusetts National Cemetery in Bourne