To share your memory on the wall of Richard Cronin, sign in using one of the following options:

Provide comfort for the family of Richard Cronin with a meaningful gesture of sympathy.

He made a career in the automotive industry, the highlight of which was 30 years spent with BMW North America. He was a “people person” through and through, striking up conversations and making friends in the most unlikely places. While Terry was working he loved being out on the road, collecting and sharing stories and building friendships. The same was true in retirement. He developed new routines, finding fitness and enjoying daily walks and outings with his beloved dogs Blue, Harley and Grover. He made food deliveries as a driver for the Family Pantry of Cape Cod. He drove the Harwich Council on Aging senior bus, taking his passengers – soon his friends – on errands around town.

Terry laughed often and loved freely. His family and friends benefited from his sage advice and affection. He was generous with his time and his tools, and the Cronin home was a meeting spot for holidays and gatherings throughout the year.

Terry is survived by his children Todd (Rye, NH), Traci (Belmont, MA) and Ty (West Harwich, MA) Cronin, and Elizabeth Ross (Coconut Creek, FL); their spouses and partners Karen Stewart, John Doherty, Brenda Azure and Michael Weiss; and their children Sawyer (13) and Wes (11) Cronin; Anna (17), Layne (14) and Declan (11) Doherty; Sienna (14) and Alexa (12) Azure. He also leaves his sister and brother-in-law Judy and Tom Purvis of Hilton Head, SC, and his sister-in-law and brother-in-law Patty (Howard) and Peter Thompson of Port St. Lucie, FL, and many beloved nieces and nephews. He was preceded in death by his wife Trudi (Howard) Cronin and their infant son, Scott Alexander.

A memorial service will be held at a later date. Gifts may be made in his memory to the Family Pantry of Cape Cod, 133 Queen Anne Road, Harwich, MA, 02645 (www.thefamilypantry.com).
Read Less

Receive notifications about information and event scheduling for Richard

Posted Apr 22, 2020 at 12:55pm
Terry drove the Friends minibus in Harwich for a number of years, ferrying seniors to local banks, Shaw’s Grocery Store, the Post Office, and CVS Pharmacy. He was a intensely committed to the seniors and helping them meet their weekly needs.

As President of the Friends of the Council on Aging, I was fortunate to get to know Terry and respected his dedication to helping support Harwich’s seniors. Our Board and the seniors will miss Terry.

Posted Apr 21, 2020 at 10:09am
Sad to hear of Terry's passing and Gertrude's. Terry was a long time driver for Friends of the Harwich Council on Aging. He cared deeply for his "Senior Travelers" as they made their way through Harwich Port on weekly errands.
Comment Share
Share via: 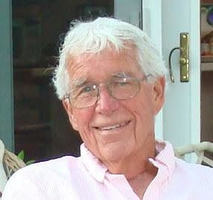