To share your memory on the wall of Roald Rolfson, sign in using one of the following options:

He graduated with... Read More
Roald J. Rolfson, 73, peacefully passed away at the Norwell VNA’s Pat Roach Hospice
Home on September 25, 2019. Roald was born to Roald K. and Elnora (Johannes)
Rolfson on September 10, 1946 in Wausau, WI.

He graduated with honors from St. Olaf College in 1969 went on to the University of
Wisconsin - Madison to obtain a Master’s Degree in Social Work. This was followed by
five wonderful years serving as Director of Social Service at Luther Hospital in Eau
Claire, WI. Then it was on to the University of Iowa Hospitals and Clinics where he also
became Director of Social Services for the 1100 bed tertiary care hospital. It was in
Iowa City where met his wife Mary Lou Portais who was originally from Plymouth, MA.
In 1981 they moved to the Boston area, were married, and Roald started a 23 year
career at the Hebrew Rehabilitation Center for Aged (HRCA). At HRCA he started out
as Director of Social Service, was promoted to Vice President of Operations, and
ended his years of service at the 725 bed chronic disease hospital in charge of Center
Operations.

His 45 year career in geriatrics and health care ended in 2016 when he retired after
working for several years as Executive Director for a number of Assisted Living
Facilities managed by Welch Healthcare and Retirement group.
He is survived by his wife, Mary Lou Portais, his daughter, Kimberly Portais-Rolfson,
both of Duxbury, and his sister, Mary K. Rolfson of Appleton, WI. Roald and his family
have totally enjoyed the past twenty-five years living in and taking advantage of all that
Duxbury, MA has to offer. Roald was an avid Red Sox fan, loved sea food, and enjoyed
long walks on the beach.

Funeral and burial services will be private.
Read Less

Receive notifications about information and event scheduling for Roald

We encourage you to share your most beloved memories of Roald here, so that the family and other loved ones can always see it. You can upload cherished photographs, or share your favorite stories, and can even comment on those shared by others.

Posted Apr 09, 2020 at 06:53am
To the Rolfson family, I am shocked and saddened to have learned just last night of Roald’s passing and send you my deepest and most sincere sympathy. Roald was my boss at HRCA many years ago, and what a lovely, kind, humorous man he was. Best regards, Margaret Leyne
Comment Share
Share via:
BB

How sad and sorry we are to hear of Roald’s. We talked many times of getting together. Our deepest sympathy to you and your family.
Fahy and Bruce
Comment Share
Share via:
J

Posted Oct 01, 2019 at 08:03pm
To the Rolfson Family, I extend my deepest sympathies. Roald was an incredible mentor and friend. He will be so very missed.
Comment Share
Share via:
EL

Posted Oct 01, 2019 at 06:43pm
I am so sorry for your loss. Roald was one of my very favorite people to work with. I was so fortunate to work with him on Nantucket and Providence House.He was always so kind and respectful. May he be at peace-and all your beautiful memories help you in the days to come.
Comment Share
Share via: 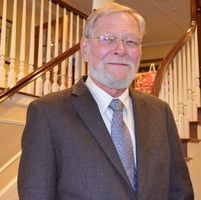