To share your memory on the wall of Robert Ayling, sign in using one of the following options:

Born in Sydney, Australia, Bob pursued his dream of an education in the U.S. He studied at Harvard and Boston
Universities, where received his Doctorate in Social Ethics in 1965. After serving on the faculties of
Northeastern University and the University of Maine, Bob joined the U.S. Government and had a long
and distinguished career leading international development projects with VISTA, the U.S. Department of
Agriculture, and the U.S Department of State. He worked in over 40 countries, including Liberia and
Cote d’Ivoire in West Africa, where he and Eve lived for almost 5 years. Bob dedicated his life to the
betterment of the developing world. His was a life well lived.

The family extends its gratitude to the staff at Newfield House, for their unending kindness and care.
In lieu of flowers, remembrances may be made to The Wildlands Trust, 675 Long Pond Rd., Plymouth MA 02360 and The Purrfect Cat Shelter, P.O. Box 548, Medway MA 02053.

Services will be private.

Plant a Tree in Memory of Robert
Plant a tree 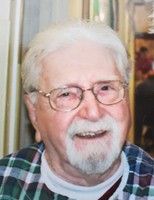