To share your memory on the wall of Roland Bolduc, sign in using one of the following options:

Rollie was predeceased by his wife of 53 years Arlene (Alzene) Bolduc; brothers Robert Bolduc
of Bass River; Norman Bolduc of Plymouth; and grandson Patrick Bolduc of Middleborough. He
is survived by his son Greg and wife Kathy of Sun City Center, FL; daughter Cheryl Bolduc of
Plymouth; his son Jay Bolduc of Carver; his sister Pam Carmichael of Middleborough;
granddaughters Kristin, Lacey, Brianne and Haleigh. Special thanks to Brenda Clair and her
family for making the last ten years of Rollie’s life so happy and fulfilling. Due to the COVID-19
virus the family has decided to have a private service. Memorial donations in lieu of flowers in
his name may be made out to the Plymouth Little League, P.O. Box 1293, Plymouth, MA 02360.
Read Less

Receive notifications about information and event scheduling for Roland

We encourage you to share your most beloved memories of Roland here, so that the family and other loved ones can always see it. You can upload cherished photographs, or share your favorite stories, and can even comment on those shared by others. 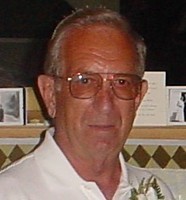