To share your memory on the wall of Thomas Crahan, sign in using one of the following options:

Print
Thomas F. Crahan, Jr., of Monument Beach, Massachusetts, passed away on December 24,
2019 at Brigham and Women Hospital surrounded by his family.  He was the husband of the
late Urith G. Crahan.

Thomas was born on September ... Read More
Thomas F. Crahan, Jr., of Monument Beach, Massachusetts, passed away on December 24,
2019 at Brigham and Women Hospital surrounded by his family.  He was the husband of the
late Urith G. Crahan.

Thomas was born on September 28, 1945 in San Francisco, California. He was the son of
the late Thomas F. Crahan, Sr. and Doris M. (Hickey) Crahan.

Upon retirement from Verizon Telephone Company, he spent time with his family and
watching his grandchildren grow. Known to his grandchildren as Pop Pop, he was so very
proud of them all, Courtney Elizabeth, Austin Charles and Avery Hsueh . He enjoyed family
gatherings whether it be for a birthday party, an anniversary or a holiday. He loved family
vacations to the most magical place on earth, Disney.

We encourage you to share your most beloved memories of Thomas here, so that the family and other loved ones can always see it. You can upload cherished photographs, or share your favorite stories, and can even comment on those shared by others. 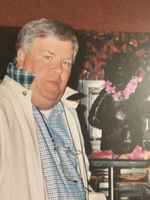