Obituary for Thomas A Vogel 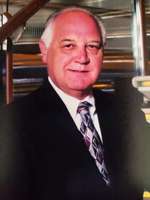 Thomas A. Vogel entered eternal rest at his Cape Cod home on August 15 th 2020. He was 75. “Tom” was
born and raised in Denville, New Jersey, son of Vincent and Frances Vogel. Survivors of his legacy include
his wife Arlene of 52 years, his son Mark Thomas and his wife Jeanette of New Jersey, his elder brother
Frederick and wife Sally of Maine, and several dear nieces and nephews.

Tom raised his own family in Roxbury, New Jersey, where they lived for 38 years. Tom and Arlene then
retired to Cape Cod, Massachusetts where they resided for the next 18 years. Tom was devoted to his
beloved Arlene. Their marriage was defined by an everlasting commitment and dedication to one
another. Tom was a proud father to Mark Thomas and was a trusted mentor and role model for his son.
Dad instilled in Mark values he held dear – honesty, independence, integrity, and patience. Tom was a
kind and gentle soul who cherished the simple pleasures in life. He often enjoyed a cigar in his backyard
shed while listening to his revered New York Yankees. His favorite things included grilled steak and corn
on the cob, Beagles and Dachshunds, his idol Mickey Mantle, and peanut M & Ms. He loved mowing his
lawn and tending his gardens. Upon his retirement his mantra became “every day is a Saturday.”

He graduated from Montclair University in New Jersey with a B.S. in accounting and marketing and
received his MBA from Farleigh Dickinson University. He achieved both of these goals by taking night
classes over the course of two decades while working full time and raising a family. Tom was hesitant to
tout his own accomplishments and instead spoke pride fully of Arlene and Mark’s successes throughout
their lives. Tom served proudly as a member of the New Jersey National Guard. He retired after 40 years
of dedication from JCP&L Morristown, New Jersey as the Director of Customer and Community
Relations.

Our special gratitude and thanks to Dr. Ziad Farrah and Dr. Jaclyn Flanigan, as well as the oncology
department nurses and staff at Cape Cod Hospital for their exceptional care and compassion shown to
both Tom and Arlene. In lieu of flowers, donations may be made to the Davenport-Mugar Cancer Center
and/or VNA Hospice, both in Hyannis, Massachusetts. A memorial celebration of Tom’s life will be held
at a later date.

Obituary lovingly written by the family of Thomas Vogel