To share your memory on the wall of Tommy Cowgill, sign in using one of the following options:

Provide comfort for the family of Tommy Cowgill with a meaningful gesture of sympathy.

Print
Tommy Don Cowgill, a retired educator and longtime former resident of West Dennis, Mass., died February 3, 2020, of complications from Parkinson's Disease at South Shore Hospital in Weymouth. He was 83.

Tom was born March 25, 1936, in Dallas, Texas, the son of the late Don Lee and Jewell (Addington) Cowgill. He was a 1954 graduate of W.H. Adamson High School in the Oak Cliff section of Dallas and served in the United States Army. He eventually earned a B.S. from North Texas State University and an M.A.T. from the University of Chicago.

Tom had a long career as a high school math teacher, technology teacher and coach that spanned some 35 years and included stints at some of the finest independent schools in the nation, including St. Mark's School of Texas, Kent School in Connecticut, St. Mark's School in Southborough, Cushing Academy in Ashburnham and Hebron Academy in Maine. Tom and Bette retired in 1998 to their beloved home on Cape Cod, where Tom enjoyed fishing with friends and family, and Bette further developed her doll business.

Tom is survived by three children: a son Terry, his wife Laura and their family in Lakeville, Conn.; a daughter Robin Greland, her husband John and their family in Hanover; and a daughter Leanne of Dennis. Also surviving are three stepchildren: Jason Piccin of Watertown; Lisa Piccin Grant of Santa Barbara, Calif.; and Amy Piccin of Fall River. He also leaves a sister, Sandra Sasse of Mansfield, Texas, and eight grandchildren and step-grandchildren.


Services will be private.

We encourage you to share your most beloved memories of Tommy here, so that the family and other loved ones can always see it. You can upload cherished photographs, or share your favorite stories, and can even comment on those shared by others.

I am a former St Marks student who attended the school from 1964 - 1968. Your Dad taught several of my lower math classes as well as the AP Calculus class my senior year. And he was the BEST Young and extremely confident, his St. Mark's students really related to him. Of the 15 young men in my AP class, all placed out of college calculus. That's how good your father was! And very funny.
After St. Mark's, I thought about your Dad often and what an inspiring individual he was. He positively influenced many people and he will be greatly missed.
My thoughts and prayers are with you and your extended family.

I was a student of your father’s in the 1964-1968 range. I remember him well, and the patience and persistence he showed in teaching Marksmen the finer points of trigonometry, algebra, functions, and calculus. I liked math so much that I was a math major in college for two years. However, when I reached vector analysis (particularly orthogonal vectors in N-space) I realized I had to find another line of study, and switched to economics, then ended up studying law.

Your father had a long life and I hope a good one.

My best to you and your family.

Posted Feb 10, 2020 at 01:19pm
My deepest condolences to Tommy's family. I taught in the mathematics department at St Mark's School of Texas with Tommy from 1964 - 1968. He was a passionate teacher and was devoted to his students.
Gene Oltrogge
Comment Share
Share via:
BH

Thank you Bob. Tom treasured your friendship. Hope you are well. -Terry Cowgill 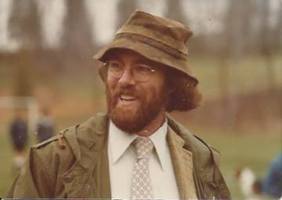