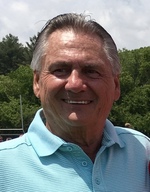 William R. Kearney, 71, of Plymouth, MA, died peacefully on April 3, 2020 after a courageous battle with Cancer. Born on November 1, 1948, “Billy” was the son of the late Margaret (MacLeod) Kearney and the late Walter E. Kearney of Weymouth, MA. Billy was a graduate of the class of 1967, Weymouth High School, then served in Vietnam in the United States Navy on the USS New Jersey, receiving several commendations. Billy retired from the Boston Pipefitters, Local #537. He coached Plymouth Youth Hockey for many years, was an avid golfer, loved his motorcycle and looked forward to his annual trips to Mexico. Billy aka “PAPA”, adored his grandchildren and would drop everything to be there to help whenever needed. He is survived by his wife of 45 years, Jane (McGuane) Kearney, step son, Michael Rankin and his wife Debbie of Plymouth, step daughter, Shelley (Rankin) Fantoni and her partner, Thomas Connors of Kingston, step daughter, Karie (Rankin) Pasciuto and fiancé’, Pete Seppala of Abington, and his daughter, Laurie Kearney and her partner, Bernard Jette of Carver along with his beloved grandchildren, Taylor, Lindsay, DJ, Sydney, Anthony, Cameron, Dasia and Jaden. Also survived by his brother Walter (Eddie) Kearney, his wife, Rose, and his sister, Sandra Haggerty, husband James and all his nieces. He will be missed by all.

Due to the current situation and recommendation for social distancing, a private ceremony at Bourne National Cemetery and celebration of life will be held at a later date.

In Lieu of flowers, donations can be made in Billy’s memory to the Cancer center at BID Plymouth at www.bidplymouth-giving.org/give-now/