To share your memory on the wall of Charles Siever, sign in using one of the following options:

Provide comfort for the family of Charles Siever with a meaningful gesture of sympathy.

Charlie graduated from Plymouth High School, Class of 1946. He served two years (1950-52) as a corporal in the U.S. Army, while stationed at Fort Campbell in Kentucky. When he and his young wife returned home to start their family, Charlie worked along side his parents at Johnnie’s Lunch and later at the S & M Tavern. They built their house on Castle Street where he lived until his death.

Charlie closed the lunchroom and tavern in 1971 after 34 years in business. He then worked as the manager at Bradford’s Package Store at Jabez Corner for 23 years, until he retired.

Charlie was a long-time member of Plymouth Country Club; winning the Club Championship in 1956. A weekly foursome grew into the highly attended Wednesday group, called “The Siever” where over forty golfers would gather for friendly competition and post-round libations and hilarity.

Charlie was also an accomplished candlepin bowler, appearing several times on TV on the popular Saturday noon “Candlepin Bowling” Show. He and his bowling partner, Mitt Petit, won many matches together, gaining the reputation of being the premier bowlers on the South Shore.

In his later years, Charlie enjoyed going out to breakfast with his friend, Bill and also the company of his friends, Richard, Al, Joe and Tom, playing cards at Plymouth Country Club. He had a great sense of humor and loved to tell jokes, especially to his nurses.

Funeral arrangements will be under the care of the Bartlett Funeral Home, 338 Court Street, Plymouth. Visitation will be at the funeral home on Wednesday, October 23rd, 9:30 am to 10:30 am followed by a funeral mass at 11:00 am at St. Mary’s Parish, 313 Court St. Plymouth. Burial will take place at St. Joseph’s Cemetery.

In lieu of flowers, contributions can be made to The Tom C. Siever Charitable Foundation, 22 Darling Road, Plymouth, MA 02360
Read Less 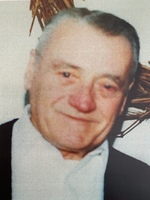