We're sorry but the candle you have selected is currenty in the process of being purchased or has just recently been purchased.

Please feel free to select another candle or check back in 15 minutes to see if the candle you have selected has been released for purchase.

We're sorry but there are no candles available for lighting.

You have already begun a candle purchase session. If you would like to continue with your current candle choice please click "Continue" otherwise please click "Select Another".

In Memory of
James Albert
Matthews Jr.
1938 - 2019
Click above to light a memorial candle.

The lighting of a Memorial Candle not only provides a gesture of sympathy and support to the immediate family during their time of need but also provides the gift of extending the Book of Memories for future generations.

In the event that there is an error
in the information presented,
please contact the funeral
home by clicking here. 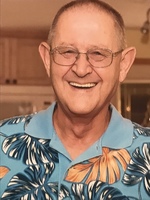 James “Pete” Albert Matthews, Jr. (there are conflicting stories about where “Pete” came from, and his
family would love to tell you all of them) died peacefully at his home in Carver, MA on Friday, August 9,
2019. This was just one day after celebrating his 60 th wedding anniversary with the love of his life, his
best friend, and the most patient woman alive, Beverly Jane (Shores) Matthews.
The eldest son of Maizie and James Matthews of Whitman, MA, he was born the day after Christmas in
1938 but still lived everyday like it was a holiday. After high school, Pete kicked off a varied career of
selling things or helping others set up shop to sell things, but mostly he did a lot of driving and he made
a lot of friends along the way. He and Bev raised their children in Sandwich, MA and then later in
Whitman. After retirement the two of them blew that pop stand and spent a few fun-filled, humid years
in Punta Gorda, FL before settling back up north in Carver, amongst the cranberries and turkeys. With
wild abandon, he ate too much ice cream, spent too much time on Martha’s Vineyard with his
grandchildren and great-grandchildren, and enjoyed too many long-winded stories from the many
people he encountered. He was a talented gardener with his home on the walking garden tour in
Whitman, which combined his two interests of gardening and chatting with people.
He will be remembered so dearly by all those that knew him as a man with a warm heart, a green thumb
(which none of his grandchildren inherited), a biting sense of humor (which they definitely did inherit),
and a dangerously contagious laugh. Besides his blushing bride, he leaves behind his daughter and son-
in-law Donna and Warren Holmberg of Oak Bluffs; his son James “Jimmy” Matthews of Whitman; his son
John; granddaughter Jennifer, her husband Kyle, and their children Alison and Jacob of Oak Bluffs;
granddaughter Michelle, her husband Michael, and their daughter Maisie of Acton; grandson David and
his husband Thiago of Edgartown; brothers John and Wayne Matthews, as well as his sister Jayne
Badore and their loving families; and many, many friends, neighbors, coworkers, and assorted gentlefolk
that would have met Pete and thought “what a good guy.”
Following his wishes, there will be no funeral service. Instead, his family encourages you to have a root
beer float, laugh at your own joke, and consider donating to the superheroes at Cranberry Hospice and
Palliative Care, 36 Cordage Park Circle, Suite 326, Plymouth MA 02360.

This Book of Memories brings those affected by loss together by encouraging communication and self-expression. By giving friends and family a special place to tell their stories and express their feelings of loss, it helps them care for one another during a very difficult time. Click on any of the links to the right to access features or information within this memorial website.